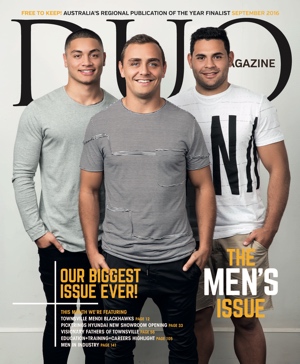 I was attacked by a shark earlier today. I survived. Just. Well, not really. But I loved it.

IT had been an inspiring morning, enjoying the Innovation Business Breakfast at the DUO Magazine table (P.S. thank you for the invite DUO!), listening to all of the great things happening and about to happen in our beautiful city. Listening to business leaders share their stories of success and interestingly, failure. You could not help but feel #TownsvilleProud and excited for the future. Then it happened. The event was finishing and people were beginning to leave their seats. I was finishing a chat when one of the presenters walked by our table, heading off to what I would assume was their seat. I smiled and gave my best "Great work mate" nod. The presenter smiled back, changed directions and headed straight for the vacated seat beside me! "Hi, I'm Steve" was my introduction to Steve Baxter, now known more widely for his involvement with the Shark Tank TV Show, but more impressively the co-founder of PIPE Networks (AFTER he had sold his first business to Malcolm Turnbull / Ozemail back in the day).

"Hi, I'm Trent" I replied. I bet he is impressed with that… I did not think to myself.

We ended up chatting for a few minutes, before he could not escape the politicians any longer. We shook hands again and in no time he was lost to the crowd.

I had been the victim of a shark attack.

As I turned back to the rest of the table I began replaying the conversation in my mind – trying to mentally file all of the important points; partly for story telling / bragging rights with my mates but mainly because I realised how much I had 'stuffed up'. Not stuffed up as in I was a bumbling mess but stuffed up as in I had a face-to-face, mono-et-mono opportunity with a human who actually makes things happen and I didn't take full advantage of my opportunity.

Of course, this isn't a sad story, au contraire – this is a fantastic story because I have seen myself caught off guard and I know I can do better and now I know how I will do better.

Lesson Two: I didn't actually use my simple explanation of what I do (aka my Elevator Pitch). I cowed from using it and went with "I do bookkeeping and BAS services" which is the least inspiring component of all of the services we provide! Not just that, Steve knows how important accurate figures are because he invests based on the numbers!

Lesson Three: I did not give Steve my business card. Would Steve need my services? Maybe, maybe not. But now I can be assured that he definitely will not use my services in the future.

Lesson Four: How can you really brag about a story if you don't get a selfie? Arguably the most important lesson (kidding).

Lesson Five: Say YES to opportunity. During our conversation Steve actually hit me with an idea of his own that he is working on (I AM BASICALLY A SHARK NOW). It involves hula-hoops, yo-yo's and other interesting concepts but he was actually discussing it with ME in our face-to-face, mono-et-mono chat and I did not say "YES, I can help you with that".

So let me be your crash test dummy. Prepare yourself so that when (not if) you are lucky enough to be the victim of a shark attack, you are ready to say YES. You never know when or how your opportunity will present itself.